Feels like: the three hundredth Review this lens.
Yes, I know all photographers all they had ever been in his hand. Then they have the lens eventually sold, given away or lost. Such is life ;o)
Nevertheless, it is worthwhile to take a closer look of this piece.
The Minolta MC Rokkor PF 55mm f/1.7 was a standard prime lens with manual focus (originally intended for the Minolta SLRs- logical when you think about the age of the lens) nowadays suitable for Full Frame and APS-C sensors, manufactured from 1966 to 1972. A lens for Minolta SR (MC,MD) mount. The current average price on EBay or in various forums is about 20 to 40 Euros. OK, more you really do not pay for it.


The lens is all metal and very solid, have a nice feel to it.

The aperture ring is very precise and clearly audible. The photographer can adjust the aperture with a little practice without eye contact. The adjustment distance for sharpness is a little short.  But with the help of the focus peaking, it is straightforward to find at a Sony NEX or the Sony a7 the correct focus point.  I have used a simple and cheap adapter NEX - MC/MD from China, like this one from amazon. The adapter sat perfect and plan between camera and lens. The delivery does take a little longer because the goods come from Hong Kong or directly from China, but you save a lot of money. 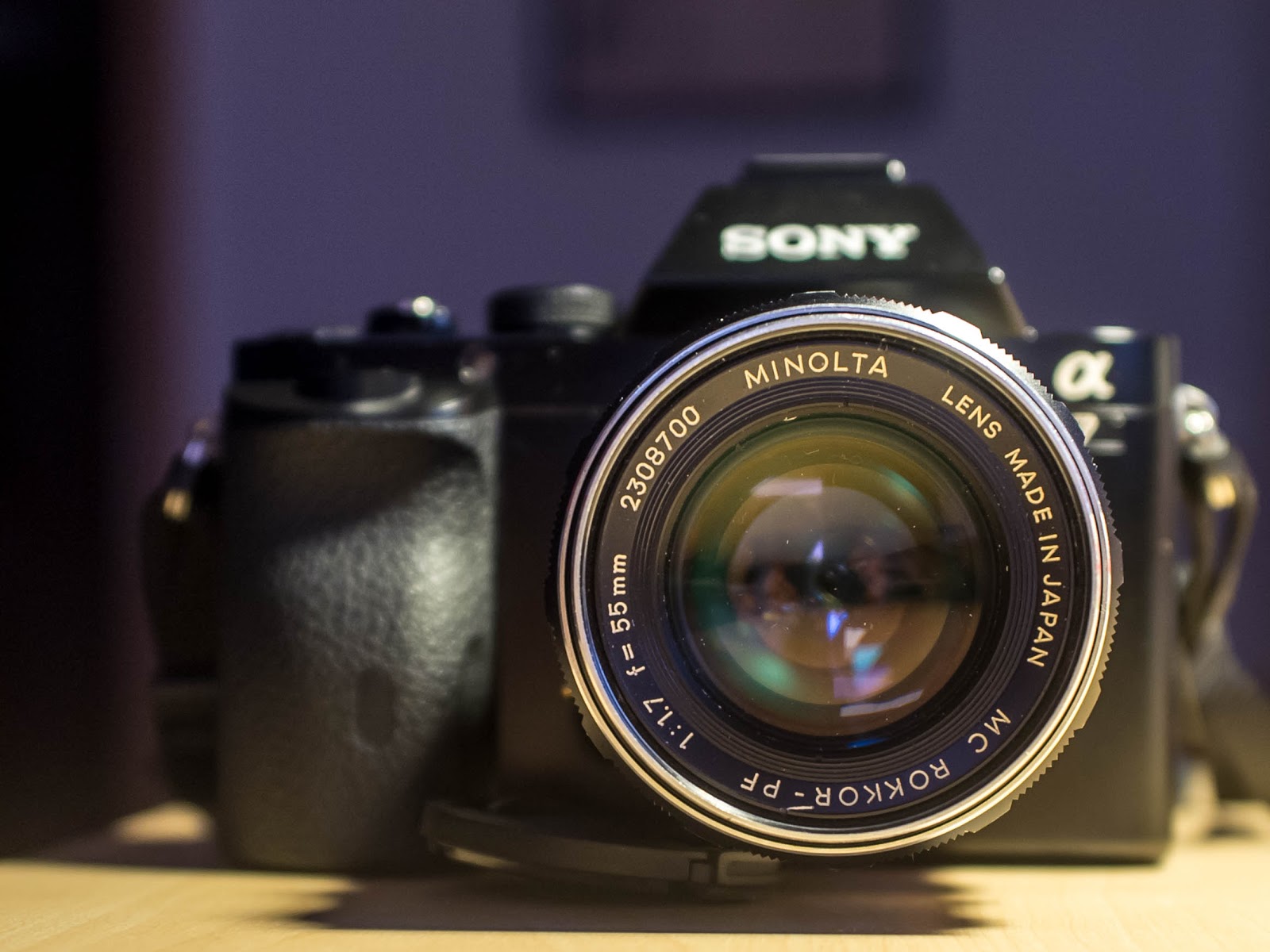 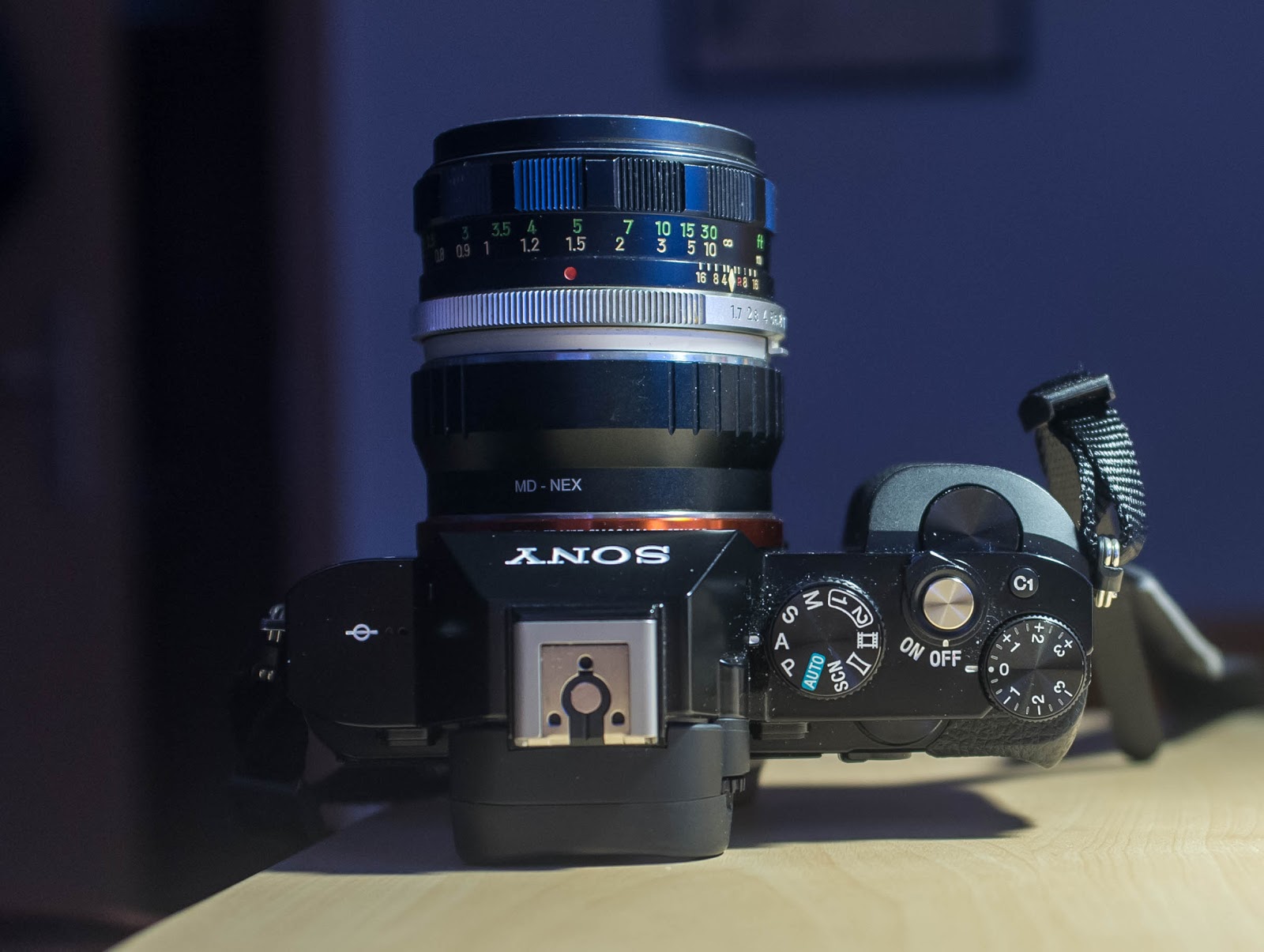 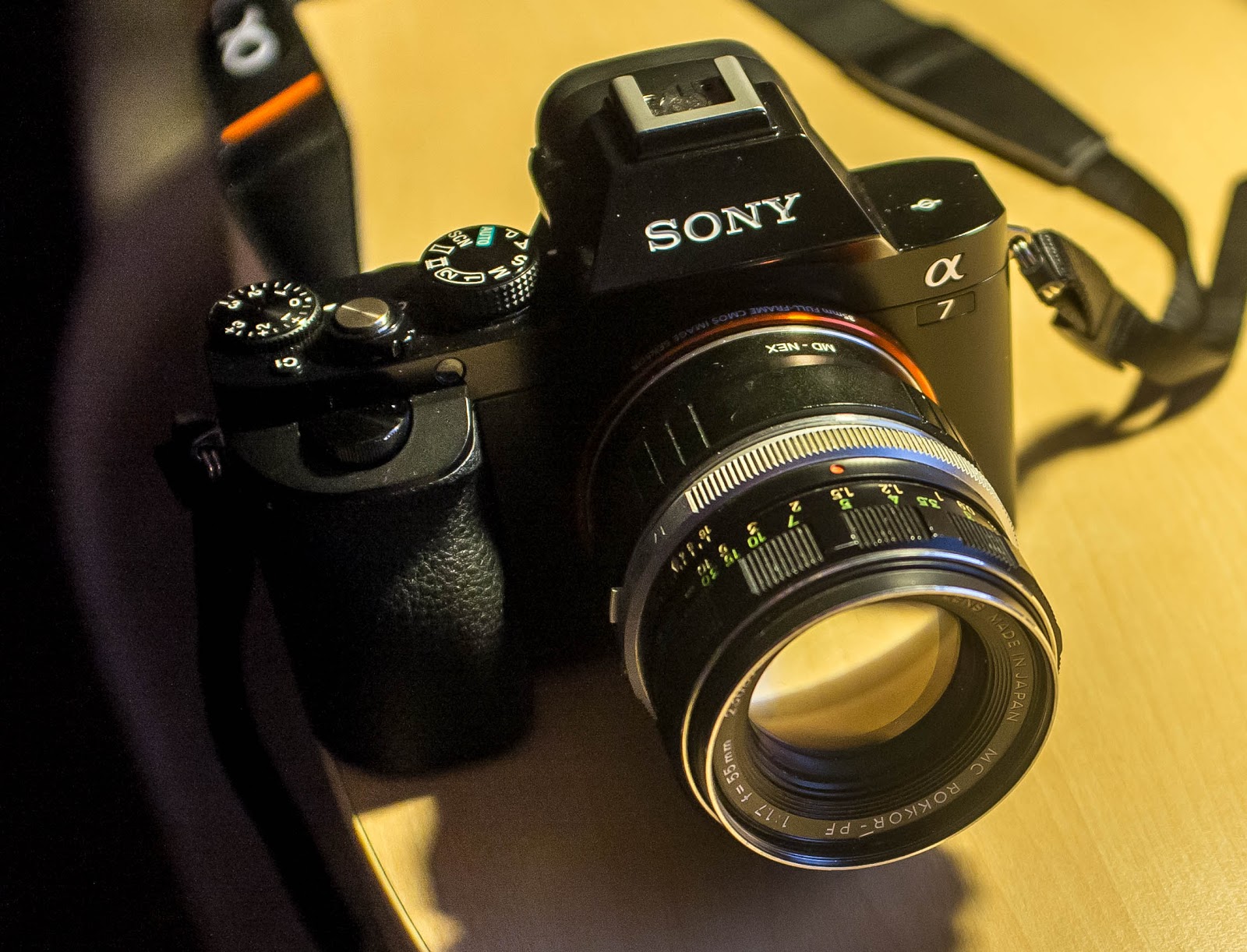 Let us now consider the image quality.
Wide open we find good sharpness and little corner softness. The colors are a bit washed out. At f 2.8 on the image is sharp from one corner to the other and shows excellent contrast and colors.
The optical resolution is outstanding. In the magnification to 100% every detail is very good to see. But: the lens is quite sensitive to the back light. The contrast is gone, it flares arise light. Photos are relatively unattractive. Closing the aperture brings no improvement. Here's a particularly two bad examples of the effect of backlighting:

Remedy a lens hood for the 52mm filter thread. The lens itself has no special bayonet for a sun visor.
You can safely buy a cheap replica from China as this one on amazon.  Who is on branded goods, should buy the original Leica, but costs about 50 euros.
The Minolta Rokkor is even suitable as a portrait lens. On an APS-C sensor, such as the Sony NEX-3N equivalent focal length 75 mm. But even at the full format as on the Sony a7 you can easily customize portraits. Look here:

To sum times together: the lens is very high quality; it makes from Aperture 2 to 2.8 very sharp, crisp images, and you'll get it relatively cheap to buy. What more do you want? Do you need more light intensity, then look to lenses with an aperture from 1.2 or 1.4, otherwise you can buy this lens without hesitation. With this lens you can easily shoot photos with available light. No problem.
I wish all my readers: Always good light!

The fast Revuenon MC 50 1: 1.4 was introduced in 1980 as a kit lens of the sensationally good Revueflex AC2. "Revue" was the trademark of the company "Quelle" from Nürnberg, go bust in 2009.
It is often told in the Internet that revue produced exclusively in the former GDR.
The here discussed "Auto-Revuenon 1.4 / 50 MC" comes not from GDR production, but from the production halls of Chinon or Cosina (were both, Cosina was rather too M42 times of suppliers, Chinon rather to bayonet era).


By far the largest part of the range of the former "Foto-Quelle" is built by Cosina and later at Chinon and come with Revue label to Germany. Meanwhile, the lenses of the brand "Revue" spread worldwide. There are many cruel bad lenses, but also some real highlights. This lens is one of the really good specimens of Revuenon.  There are at flickr, but not only there countless examples of the fantastic quality of this lens even at full aperture.

First, the usual statistics:
The manual focusing lens has a minimum focal distance of 45 centimeters. The lens mount of my copy is a Pentax K bayonet. The filter diameter is 49 millimeters. In the lens housing, there are six elements in five groups. The lens has six aperture blades. The lens is made of metal and weighs approximately 250 grams. The setting is very high-quality and convey a good haptics , the lenses are multicoated. The bokeh is very nice, look here:

A few years ago you got this lens when purchasing a camera "Revueflex" as it were bestowed with it. But times are changing.  The prices for the really good manual lenses have so tightened that you pay today up to ten times what had been common even five years ago. Today you pay sometimes  up to a hundred Euros for the Revuenon 50mm f / 1.4.   I got it for about 50 euros from a colleague from the german DSLR- forum.  The lens is perfect as a portrait lens on an APS-C camera. Converted to full frame is the focal length of about 75 to 80 millimeters. 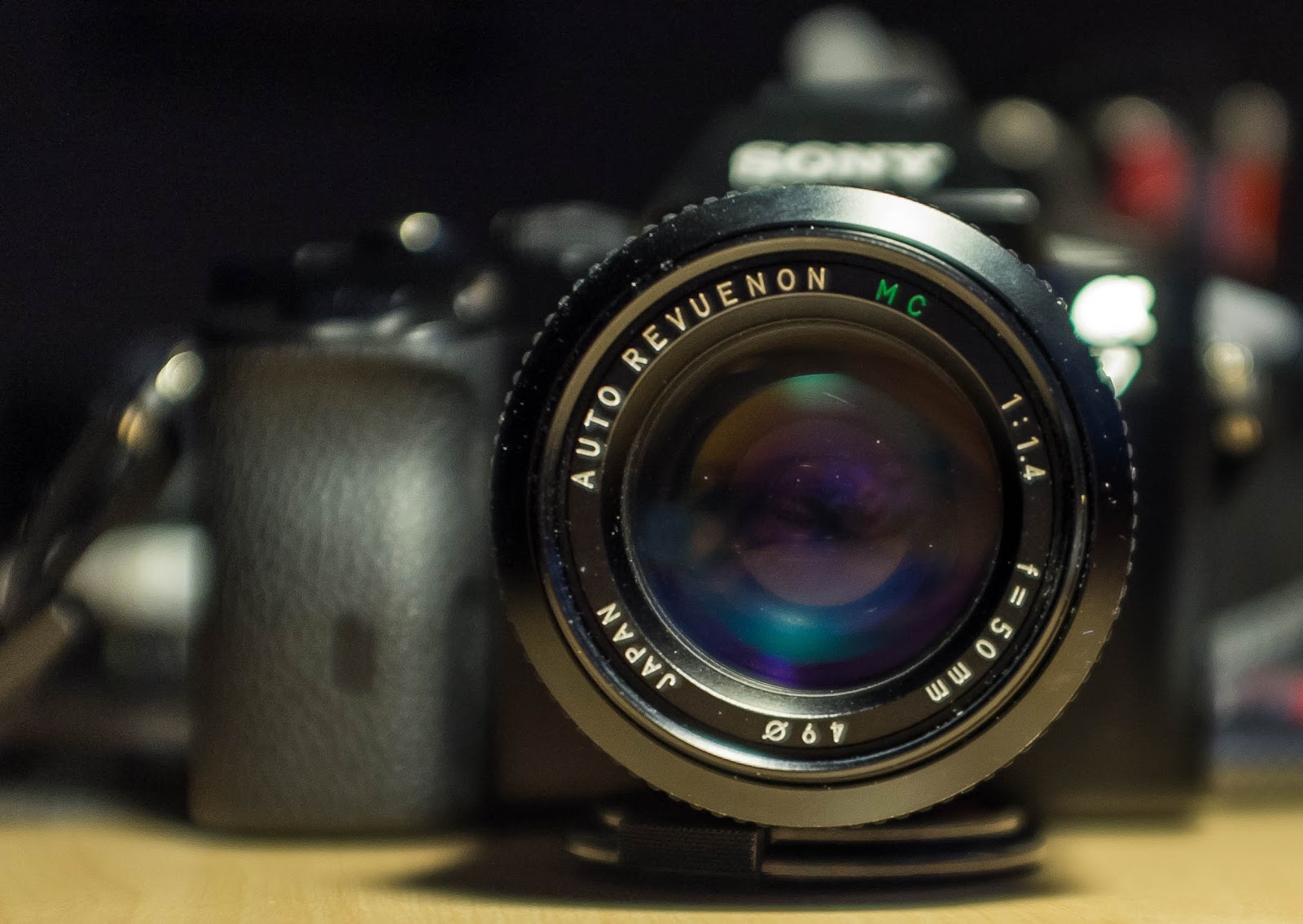 But also on full frame cameras like the Sony a7 this lens is very good for portraits. Here are examples at open aperture and aperture 4.0. Many thanks to my good friend Hartmut Wohlfarth.


What can be said about the picture quality? Well, the optical resolution is even at maximum aperture at a very high level. Even the smallest details can be seen very well in a 100-fold magnification.
I have uploaded the images in full resolution, especially for this post.
At full aperture the pictures looks little bit washed-out. But stopping down the pictures are awesome and fantastic in every sense. You'll love the glass.
At the full-frame camera lens vignetting clearly visible. If you stop down two or three times, but this effect disappears completely.

The Bokeh is very pleasing and acceptable although the lens has a total of only six aperture blades.


By direct or indirect backlight, the lens behaves relatively unspectacular. It caused some ghosting and smearing a little, but nothing really bad. You can use these photos without hesitation. For indirect backlit by the sun but a lens hood could be beneficial. But I can not look up what lens hood really fits. Because of their relatively low weight and the acceptable size of the lens can actually use as Always-top lens on a full frame camera.
The sharpness is already at full aperture absolutely fine, but at f 2.8 to f 4 it achieves excellent image quality from edge to edge.   The glass is really a stunner, you do not want to part with it more.
If it had an auto focus, it would be a real bestseller. But then it would certainly be outrageously expensive.
To summarize: If you can get it for little money, then buy it necessarily. I have no regrets and I will certainly use a good long while.
Finally, a few photos with the Auto Revuenon 50mm f / 1.4: