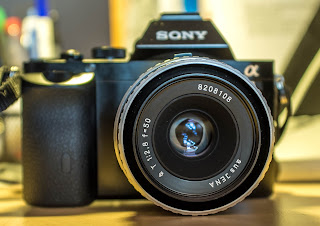 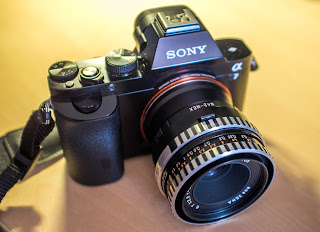 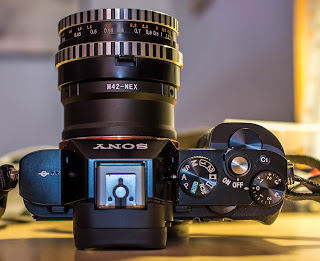 If you wanna make  a really steal for your new full frame Sony a7(s//r/II), you must snatch this little cheapy gem.
The essential technical data I have already put together in a post of 16 June-2013. Look at here. At that time I was only my little Sony NEX-3N available, so I was able to test the optical quality this wide-angle lens only on an APS-C sensor. For several months I have been photographing with the Sony a7, a camera with a so-called full-frame sensor. This corresponds to the classic film format of 24 x 36 mm. Now is a lens as the Tokina with its 24mm focal length a real wide angle. On the one hand quite pleasant, especially in indoor shots. On the other hand is now also the typical optical errors of a wide-angle lens.
First, the barrel distortion at the edges may be mentioned. I use such an old jar on a modern camera, then optical errors are corrected course not inside the camera. Correction requires electronic exchange of data and it can with a purely mechanical functioning lens in this case not be taken for granted. The adapter between lens and camera costs a little light intensity (scattered light losses during radiation passage), but separates the more reliable the camera and lens from each other.
For modern lenses (eg. from the Canon EF-S or AF-S Nikon series), there are now adapter with electronic data transmission, but these are very expensive and usually provided with additional corrective lenses, which further reduces the light output.

The edges are not only distorted, but at the same time show themselves to intense contrast lines strong purple and blue fringing. Taken to the raw data format such disturbances for example in Adobe Lightroom must be removed with one click, but in jpegs they represent a permanent nuisance.
So at this point a specific recommendation as experience in recent years with many old and ancient lenses: you photograph please in raw data format. Optical corrections must be made easier here.

The Tokina was already on the APS-C format relatively sensitive to backlight. On full frame this phenomenon is still much more pronounced. Sometimes already extends slightly laterally incident light to the photo completely get rid of contrast and color. The pictures are without a lens hood just rubbish. Here two typical example for side light.

The sharpness is very good at such a lens with medium light intensity even at full aperture. Of course, only in the center to about two-thirds of the exposed area to the screen. The corners at f 2.8 and 3.2 rather soft. Little bit stopping down to 3.5 to 4.0 to the rescue, the photos are from now until the final image edges sharp. The effective aperture is reached somewhere between 5.6 and 8, then blurring caused by the strong light scattering of small apertures.

Overall, my conclusion is confirmed from the first review two years ago: this lens is given the required use price between thirty and sixty euros not only a bright bargain, but also a wonderful alternative to very expensive lenses from Zeiss and Sony, which currently are offered on the market: FE 16-35 mm f/4.0 ZA OSS, FE 24-240 mm f/3.5-6.3 OSS or FE 24-70 mm f/4.0 ZA OSS. Here are the best prices starting at one thousand euros.

I expect in the next few days at last the new Sony FE 28mm f/2.0 to test it on the a7. The first reviews on the net, in particular by Phillip Reeve promise a real optical highlight. Let's see how this is reflected in practice.