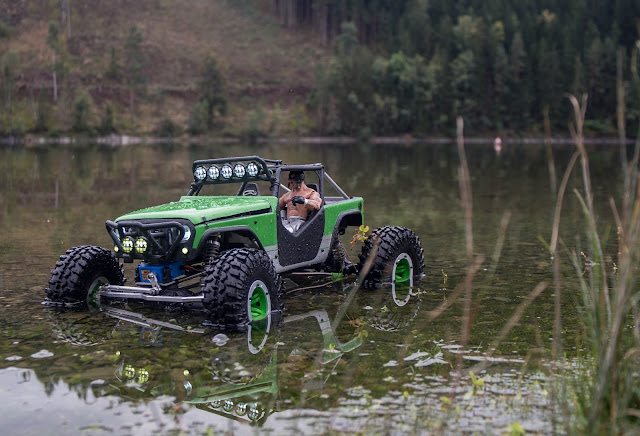 From this lens I have already collected a lot of information on the Internet. Most users comment critically to quite abjectly about this lens and you can really buy it for a song on EBay and the relevant forums. Very exactly I have with shipping pays 15 euros.

In a forum and also on Youtube, a often clicked hobby photographer has called this glass even the "worst lens in the world".  This is very violent. Anyway, I wanted to know it now and I bought it in a well-used condition in a forum.   As the photos show, the condition is quite good. The shutters are not oiled, they close perfectly. In contrast to newer lenses, these old treasures are always made of the full metal and make a very solid impression.
The focus ring is attached at the front and quite narrow. You have to get used to it. The individual apertures snapped firmly and clearly. You can work with the lens after some time without visual contact. 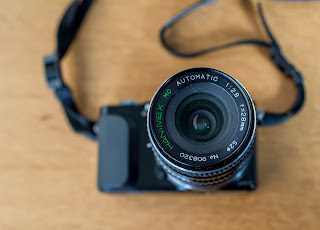 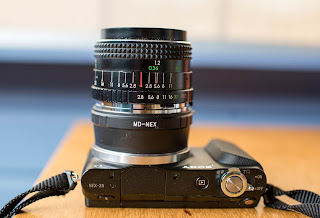 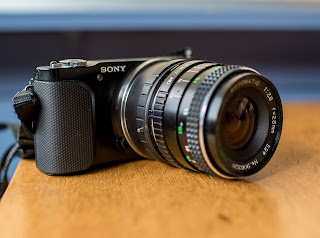 But let's start as usual with the technical data:


Hanimex is an abbreviation for Jack Hannes Import Export, founded in 1947 in Sidney, Australia - Hanimex Corporation was an importer and distributor of cameras, lenses, and other photographic equipment in Australia and New Zealand. The company also distributed consumer electronics and other non-photographic gear. Hanimex cameras were often sold under the Hanimex brand name or co-branded with the Hanimex brand and the Manufacturers brand (e.g. Hanimex Topcon).  Photographic product distributed by the company were made by Tōkyō Kōgaku, Sedic and Royal in Japan, by Finetta, Montanus, Vredeborch and Dacora in West Germany, by Pentacon in East Germany, and by other manufacturers. Hanimex distributed SLR lenses for several different lens mounts under the Hanimex brand name. On 22 April 2004 Fuji Photo Film Co., Ltd. acquired 100% of the shares of Hanimex.

My specimen is made for the Minolta bayonet, so with an MC or MD mount.
Minolta quality control in the 70s may have had very high demands. Because the picture quality, which I have found in my copy, is really unusually good. Yes, I am not afraid the Hanimex in some respects quite compare with my Nikon AiS or the new Canon FD in 28mm. From the price-performance ratio, you should be able to compare the Hanimex with the Sigma Mini Wide II. Although even for this early Sigma version, moon prices are now required, but some years ago you got such a Sigma 28mm f / 2.8 still thrown for ridiculous 20, - Euro.


However, my Hanimex seems to be somewhat decentered on the left. Maybe it has fallen down once or pasted somewhere.
Let us look at the picture quality for different light situations and motifs somewhat more precisely.

The following picture was deliberately developed with the shutter completely open. The focus point is on the connection to the right tap. The sharpness is striking even when the aperture is open. This contradicts all opinions on the Hanimex, which are widely used in the net. On the contrast edges you can see light purple colors. In Lightroom, however, this is immediately removed with a mouse click.The lens is actually multicoated.The bokeh is quite pleasant and quiet.


Stopped down lightly to f/5.6, the lens shows a good sharpness almost to the edges. Amazing. Even with backlighting the lens is pleasing and does not show too much optical problems. The flares are very reserved and not unpleasant.

If you consider that this object is usually priced between ten and twenty euros, this glass is really a treasure. My advice: before the purchase just a few sample photos shoot. Only then decide whether to buy or rather not. There was probably - especially with the M42 mount - very large quality differences in the production of the lens. My copy shows a remarkable sharpness and good picture quality. Also the resolution, the micro-contrast and the behavior in the case of backlight is above all doubt.
I can - contrary to the popular opinion in the Internet - this lens as a cheap solution only recommend.
Here are some more sample pictures of Hanimex MC 28mm f / 2.8: