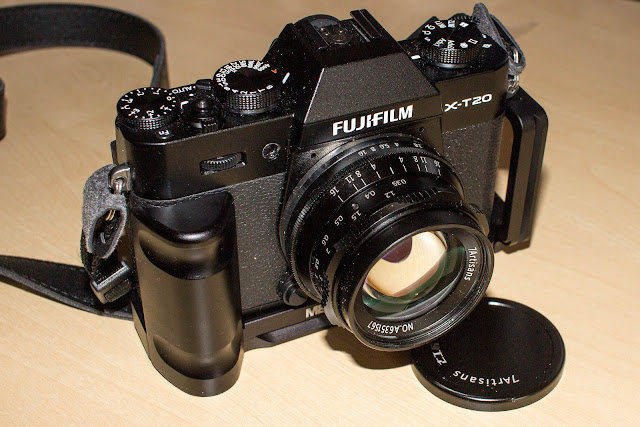 Oh, man, what a good price for such a fast lens. A lens with a starting aperture of 1.2 for a ridiculous 120, - Euros - hard to believe. But the first reviews in the net were rather sobering. Most reviewers criticized the weak sharpness, which was usable only at Aperture 2.0. Should I try anyway?
After all, I already had the Neewer/ Meike 35mm f / 1.7 lying around with me at home and the part was wide open good to use. But no matter, my curiosity was greater than expected and at such a price you could (almost) make no mistake, right?
So I ordered them directly from China and it took only a few weeks, then was the black box with the longed for lens on my desk. Not even the customs made problems because the manufacturer shipped across the UK and re-tackles the lens there. Clever!
After unpacking I was relieved, the objective is by no means shabby and a plastic bomber, but feels very valuable. Everything is made of metal and has as good a feel as my other 7artisans lenses, like the 25mm f/1.8.  A little getting used to is the aperture adjustment without audible clicks. But I already know that from the manufacturers, like Meike or Neewer. Unfortunately, a lens hood is not included in delivery, but would not have been wrong, as you will see later.

As always, we start with the statistics: 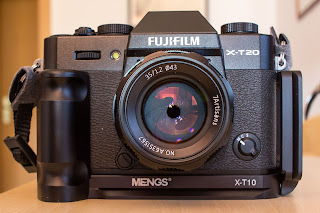 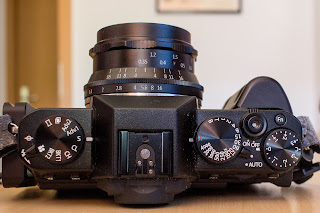 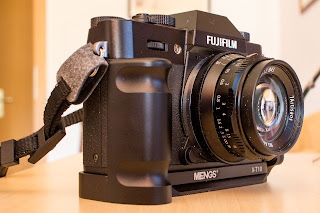 What about the optical properties? The fact is, with fully open aperture, the image result is really not the burner.  There is a sharp spot in the middle of the picture, but the image impression is milky and low in contrast. Only stopped down to aperture 1.4 or better 1.8, brings good results.
In addition, you have to be extremely careful that the light does not fall laterally or directly on the front lens. It creates disturbing arcuate flares. Here are some typical pictures in side or backlight:

That looks really bad. But as soon as you stopped down to at least Aperture 4.0, it gets better. That's a big minus point. Fortunately, you can buy screw-in lens hoods with a thread of 43mm for little money everywhere.
Vignetting is not a problem with this lens, even with the aperture open I could not find anything.


The same applies to distortions, even in close-up shots, there were only very small deviations from the image line. However, this is typical for focal lengths between 35 and 50 mm.
Now to the main topic: Sharpness of the picture.
Let's not fool ourselves: a photo is only as sharp as a razor from the middle to the outside, if you use a high aperture, as of aperture f / 8.0.  This is not different with a budget lens, like the 7artisans 35mm f / 1.2.  If you have expected something different, you must buy an L-lens from Canon or spend at least a high three-digit amount of money.  For a meager 120, - Euro, there is a sharp spot in the middle of the picture and on the outside, it is sometimes not so nice. So what, you get what you pay for!
As you can see this picture well, this must not be a disadvantage:


That really does not look bad, provided you have the right light and do not pay much attention to the corners. The big advantage is just the open aperture, with which you can put the motif out well. Thanks to the magnification function and the highlighting of the contrast edges on Sony and Fuji cameras (focus peaking), you can control the image sharpness very well.
Amazingly, I had no problems with chromatic aberrations. At my other cheap lenses of Meike, Neewer but also 7artisans that was really annoying sometimes. Even if Adobe Lightroom offers a corresponding function with the help of a single mouse click is sufficient to remove the purple fringing. There were still gray areas that have messed up some image downright. With this lens, this phenomenon did not exist even with completely open aperture.  Obviously, 7artisans has incorporated appropriate "analog" lens corrections, because there is no software correction for this lens.
Let's summarize: this lens can not perform miracles, it does not outsmart physics. But for little money you get a lens that synonymous with open aperture beyond the f/1.4 gives good results. However, I would not work with completely open aperture at f/1.2, the results are not convincing.
So basically: Thumbs up - a buy recommendation.
Here are some pictures that have been taken in the last weeks: